Level 7 is the seventh and final level of The Simpsons: Hit & Run. It takes place on October 31, with the player reprising their role as Homer.

Level 7 marks the largest change in map design the game sees; Springfield has become infested with zombies, its water supply has been completely replaced with Buzz Cola, and the aliens have left their mark on the town.

Level 7 takes place on October 31, on Halloween night. With aliens invading Springfield and Buzz Cola in the water supply, bringing the dead from their graves, the level is a breeding ground for spookiness. Homer must stop the aliens from destroying the human race. He is informed of nuclear waste, the aliens' weakness, and must deliver as much of it as possible to the UFO before it's too late for humanity.

Level 7 is set at Evergreen Terrace once again and reuses the same map that Level 1 and Level 4 use; however, while Level 1 can be seen as the "stock" map and Level 4 can be seen as an extension, Level 7 is more of a restricted version of Level 1 and has several changes to it than the previous two levels: The 939 district of Springfield has been closed off from the player at both the drawbridge by the school and the nuclear power plant because part of the drawbridge and the piers underneath it have been damaged, and the ground underneath is missing (it could have possibly sunk into the colafied water).

As for the power plant, a large metal door shuts off the plant's interior and the entrance has a different appearance then it did previously, the 939 Area Code sign seen on the rich side is also missing, the First Church of Springfield has been destroyed, possibly due to the zombie invasion, the river separating the poor part of Springfield from the suburbs has been changed from water to blood, with it making pig-like noises, fire hydrants now release a lime green substance when hit, and the tomacco field is now a pumpkin patch.

The whole level is designed in a Halloween theme, as the newspaper that is sold on this level is dated October 31st. Notable changes to the environment include Krusty Burger being changed to "Zombie Burger", the Kwik-E-Mart becoming the "Spook-E-Mart", the Evergreen Terrace sign saying "Evergreen Terror", Flanders' House having a fence propped up in its' front yard with a sign saying "No Pagans" because of the zombie apocalypse, the blue house with the shortcut near the Simpsons House reading graffiti inspirations saying "No T.V. make Homer go crazy", the school is decorated as a castle (it is now Springwart's School of Magicry), civilian cars being replaced with hearses, coffin carts, witches, and ghost ships, the grass becoming darker, jack-o-lanterns being in every corner of the level, ghosts hovering above the streets, the grill in the Simpsons' backyard being replaced with a jack-o-lantern and several homes having Halloween decorations out front. In addition, the trees have lost their leaves. Several ghosts, witches, and spiders can be found throughout Springfield, 2 houses away from the Zombie Burger (Krusty Burger but it was changed in level 7) by the cemetery, that pink house, on their garage has a big spider web on it, and there is a spider near the pet cemetery (the one you can also get into in Levels 1 and 4), and the statue above the Lard Lad Donuts building now lights up and moves its left arm and face around, even opening and closing its mouth in the process, making robotic elephant-like noises.

One major, physical change to the level is the addition of alien spacecrafts. They are both located at opposite ends of the map and play different roles in the level. The spaceship at the school playground hovers over the baseball field and sucks up any trespassing vehicles. This plays a crucial role through the middle and later part of the level's main missions. The other spaceship is wedged into the power plant, exposing the interior via a break room of sorts. The player has access to the highest level of the plant, but not much of interest is found other than multiple Cola Crates and Vending Machines. The destroyed power plant is the focal point of the fourth mission.

This being the only level in the game that does not have the map in a loop as the bridge that leads to the rich side of Springfield is blocked off as well as the door to the power plant being shut, making those areas of the map in this level inhabitable. While is plays a part in the game during the last few missions in the game going to point a, the power plant to point b, the school it was revealed that the area was cut out of the map was due to time restraints and production cost. This is evident with unused tracks that play if one glitches the game to access the undeveloped area where funeral music can be heard where the Stonecutters lounge would have been as well as a track called 'Celebration' which most likely would have played in Burns' mansion.

The last notable change is the opening of the graveyard. In Levels 1 and 4, the player would have to drive around the gated portion of the graveyard, with the best shortcuts sending the player into either the Krusty Burger by the bridge of into a swath of pedestrians and vehicles. In Level 7, the gates are opened, due to the zombie apocalypse, and provide a valuable shortcut that every mission in the level makes use of. The said graveyard also has a river underneath the gap that allows for a platforming section on foot. The graveyard is the Springfield cemetery.

The level is also unique for its sounds and music (which were changed to fit in with the Halloween theme). Because of this, a lot of tracks heard in Levels 1 and 4 will be different in Level 7, some of these examples being the Kwik-E-Mart, which plays an eerie sounding tune as opposed to the arcade sounding music in the previous Suburb levels. The cows in the barn near the Tomacco field have different mooing sounds which sound more evil than they did in Levels 1 and 4, and the level's opening music is played by a pipe organ instead of playing the first few notes of the Simpsons opening theme. Also, if the player goes into the playgrounds near the Simpsons House and at the school, they will hear the voices of various kids (Bart, Lisa, Milhouse, Ralph, Nelson, the kids from Levels 1-6) and Agnes Skinner.

Arachnophobics, there are six spiders throughout this level. Where they are found are as follows:

The music for Level 7 uses a Halloween-themed orchestral track that makes use of a theremin, an electronic instrument that uses electric signals concluded from the distance of the user's hands from its antennae. The theme itself is a Halloween remix of the theme used for Level 1 and 4:

The following are sound cues that play while the player is on foot: File:The Simpsons Hit and Run Soundtrack - Level 7 Ambience.ogg

Main Article: Street Races Zombies host all types of races in Level 7. They're found in:

Smarch Calender
Add a photo to this gallery

Costumes can be bought from Springfield Elementary School, Bart's bedroom or the Kwik-E-Mart/Spook-E-Mart.

The 70's Sports Car, the stock vehicle for Level 7 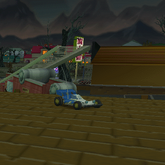 The R/C Buggy, the bonus vehicle for Level 7

The Zombie Car, the character-bought vehicle for Level 7

The Open Wheel Race Car, the race-rewarded vehicle for Level 7

The Hover Bike, one of two vehicles bought from Gil for Level 7

The Hearse, one of two vehicles bought from Gil for Level 7

Nuclear Waste, a core part of the plot of Level 7

The power plant end of the map, closed off from the player 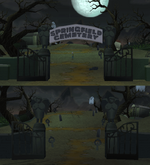 The opened cemetery gates (with and without the sign)

The draw bridge end of the map, closed off from the player 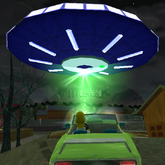 The alien spacecraft hovering over the playground

The unmodelled inside of the spacecraft hovering over the playground

Mr. Burns' office at the top of the power plant 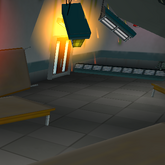 The interior of the destroyed power plant

The spacecraft wedged inside the power plant

Beams that act as stairs ascending the power plant 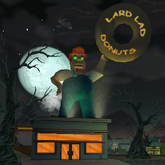 The Spook-E-Mart, the Halloween version of the Kwik-E-Mart

The mountains as they look in Level 7

The map for Level 7
Add a photo to this gallery
Retrieved from "https://simpsons-hit-and-run.fandom.com/wiki/Level_7?oldid=14320"
Community content is available under CC-BY-SA unless otherwise noted.